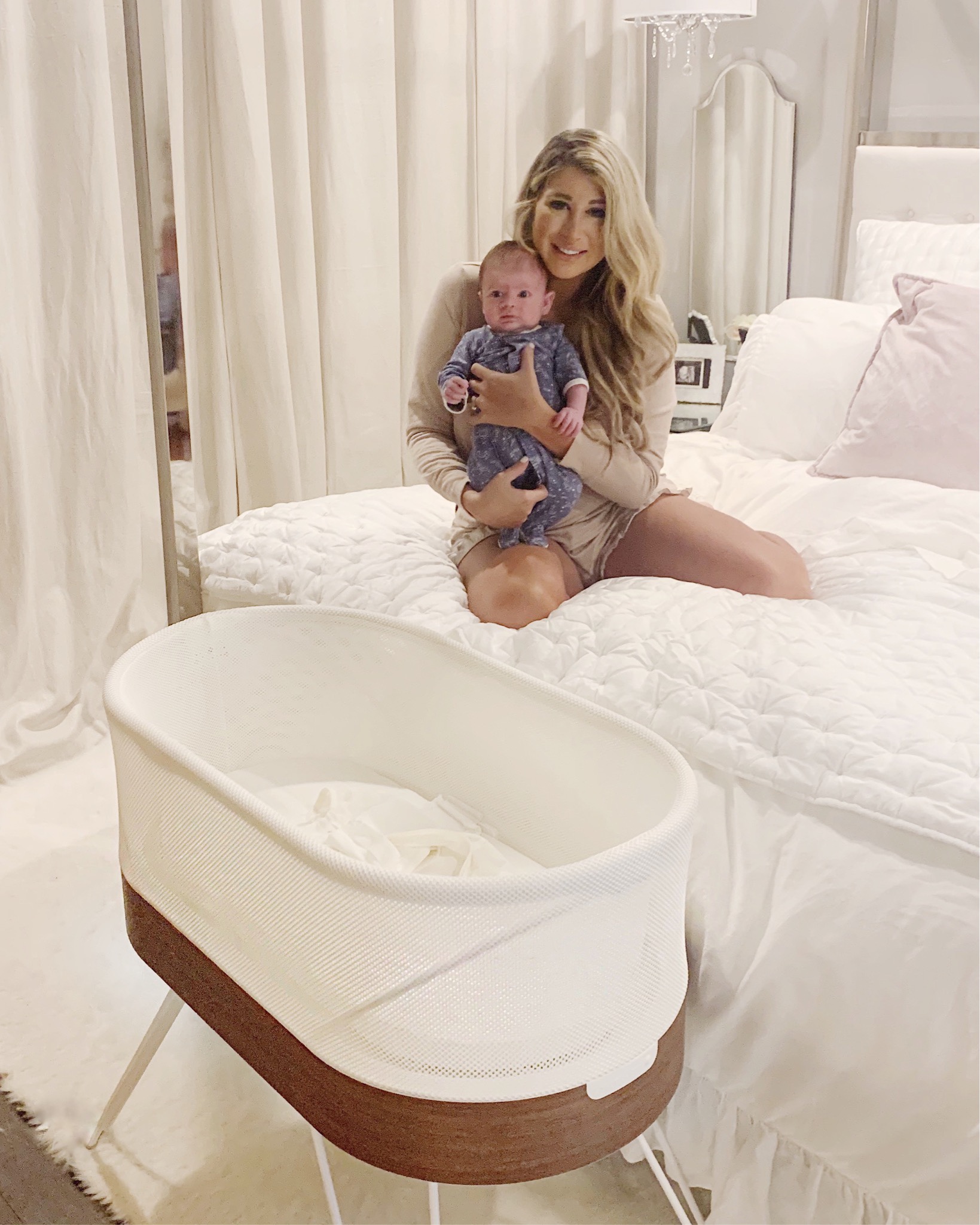 Hey guys! If your into this post your probably a momma of a little one, or about to be! My little cooper is only 7 weeks today, but I have a lot of questions about the snoo so I figured I would share my experience with it as of now and later on when it’s time to transition I will post about that as well! 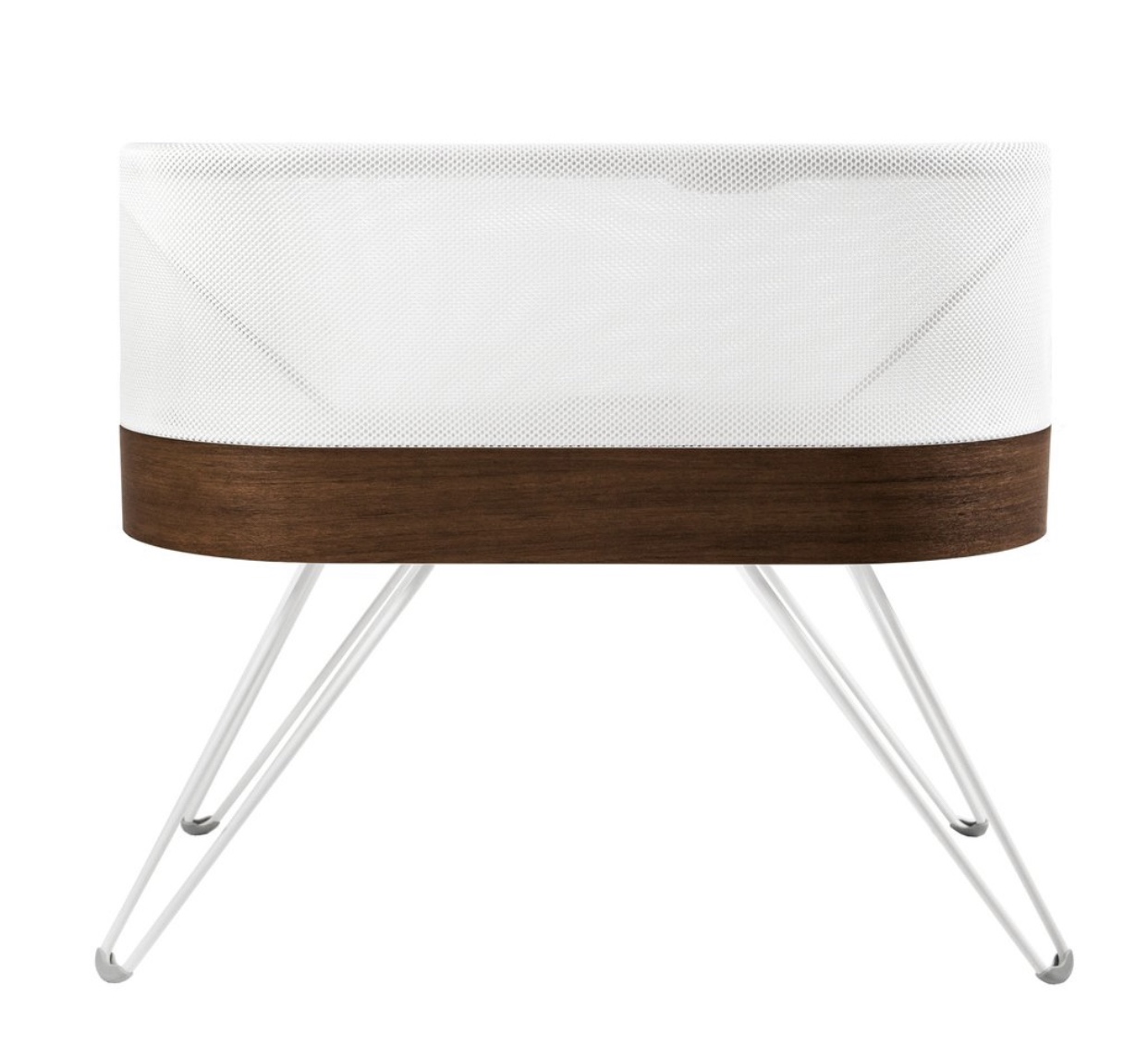 To start off, The snoo works by using motion, sound, and a snug safe swaddle method to sooth and calm your baby when they are goingj to sleep or get fussy/wake in the middle of their sleep! The motion and sound are supposed to mimic what they feel in the womb! It is sold here -> By the HAPPIEST BABY COMPANY

Me and my husband decided to purchase the snoo instead of renting! It is regularly around $1300 or you can rent for $118 a month. We chose to purchase because we got it during a Black Friday sale for around $800 I want to say! When we did the math Ryan figured we weren’t saving too much money if we rented it for 6 months at that price and that we could always turn around and sell it! Or if you plan on having more children I’d think buying is the way to go!

( If you are interested in the snoo I would keep an eye on their website/follow them on insta etc. because they have sales very frequently! )

So anyway, typically kids stay in the snoo for 6 months! When we brought cooper home from the hospital we came home with two nighttime rules, he wasn’t sleeping in our bed (although he is in our bedroom) and we weren’t waking him in the middle of the night every 3 hours for feedings, we were letting him wake us! Also, we are swaddling him until the recommended age for nighttime sleep and following a strict sleep and feeding schedule during the day to ensure a good nights rest for the whole family! We never let him sleep more then 2 1/2 hours during the day & WAKE him if he hasn’t woken in that time frame. At night, we have never, NOT ONCE, woke him for a feeding. (We were able to do this since he’s always Maintained his healthy weight, if not you obviously have to wake the baby for feedings during the night)

(Before you use your snoo, for a newborn I would set it on the limited motion option, the first time it went on high it literally looked like it was going to jiggle his head off! It’s completely tested and safe obviously for newborns, but I didn’t like how it looked lol so we turned it down! Their little neck muscles haven’t developed at all at that point, now I could turn it up and he would be fine!)

The first night in the snoo was eye opening to us with how great this thing was going to be, it rocked him slowly and he slept so well swaddled tight!

Typically when it’s time for him to go to sleep I feed him, rock him till he’s a little drowsy and then TURN ON THE SNOO, and set him in it, zip him up, and let it do it’s job! He’s never had to “cry it out” in the snoo to fall asleep! He may fuss a pinch if it’s for a nap, but it’s literally not even for two minutes!

Lately in the past two weeks, sometimes if he is fussy for a nap, I will put him in it at a time where he has calmed down from crying but yet is still crying, I zip him up tight in there and pat his little belly or rub his head, and offer the pacifier and the snoo will go on a higher setting and calm him! Again, this never takes even 5 minutes!

We try to do at least two naps a day in the snoo, with it on, in a dark room.

The other great thing about the snoo is the app! ( I will post screenshots below to show y’all how it works. It shows you in red their fussy times  and in blue their calm times! There’s also lots of settings you can change to customize to your liking! For instance, we have it on the limited motion setting, we have the sound on high (white noise) and we have it set to be motion sensitive, so if he is squirmy or fussy it kicks on a tad faster!

Here’s an example of his day/night yesterday/last night!

Here’s an example of his night when he was 5 days old.

I am a bit worried about how this will go when it’s time to transition him to the crib but lately have done some reading and it seems to work itself out!

For instance, to get babies used to being out of the swaddle, happiest baby recommends taking one arm out the swaddle for a week, if that works and doesn’t wake them (babies don’t have control of their reflexes till a certain age and their sudden movements startle and wake them) then you can let the other arm out the next week. Also, snoo has a weaning setting, so when the baby is calm it will not rock unless he gets fussy! I will update you guys later on this as the time draws near!

To touch briefly on his sleeping habits, I read several books and took a class on the most common sleep training method, none so far have involved crying it out. We also use a owlet, I will post more about this in the next few weeks. Cooper is 7 weeks old and is sleeping 5 – 6 hours in a row at night with one wake time.

Obviously, I definitely recommend the snoo! If y’all have any other questions feel free to ask!!!